What Is The Islamic Ruling On The Inheritance Of A Sister And Disowned Daughter?

Question: What is the verdict of the noble scholars and Islamic jurists in this matter where Zayd has two sisters and a daughter. And the wife of Zayd whose habits are not right, that is, having relationships with marriageable people [ghayr mahram] while she was married. Because of this, he divorced her and now he married someone else, thus from his previous wife. And now his daughter also has the same habit, that is, having forbidden relationships with marriageable people. His daughter then married someone of a low rank. Zayd wants to give all of his belongings to his own sisters. Zayd passed away, now Zayd’s daughter says this is my right, this is my property, leave it all in my name! Give it to me! The ultimate question is what will the distribution look like? And don’t forget that her daughter is married to someone of low rank. If it is given to her, it will be problematic because it will cause debauchery. So, it will be better if it is given to his two sisters as it can benefit the religion as it will be able to help in the religion. It will be a favour if this answer to this question can be given as soon as possible.
Questioner: Ghulam Ahmad Raza Qadiri from Chhattisgarh in India.

(والاخت) ولومتعددۃ (مع بنت) الصلب واحدۃ ایضا فاکثر (و) کذا مع (بنت الابن) وان سفلت کذلک وکذا مع بنت وبنت ابن (ذات اعتصاب مع غیر)
And even if the sisters are multiple, alongside the biological daughter being one or more than one, and likewise, alongside the granddaughter reaching further down, being one or more than one – the remainder inheritance will be made with others.
[Ibid: 229]
And only for that reason where the daughter married of her own wish, or in the assumption that this would cause debauchery, will the daughter not be taken from the father’s inheritance. Because it does not belong to the nullifications of inheritance. Imam Ahl al-Sunnah states:
Children can in no way be disowned from being children, apart from disbelief [kufr] – Allah’s refuge is sought. And their inheritance cannot be taken in any way, save five nullifications; having another religion, or other households, being a slave, or Allah forbids murdering the testator, or both died in the same way not knowing which of them died first, besides these the judgment will be general, as:
يُوصِيكُمُ ٱللَّهُ فِىٓ أَوْلَـٰدِكُمْ ۖ لِلذَّكَرِ مِثْلُ حَظِّ ٱلْأُنثَيَيْنِ
Allah commands you concerning your children; the son’s share is equal to that of two daughters. [4:11]
[Ibid: p. 349]
Conclusion:
In any case, in the proposed question, it is not permissible to take the father’s inheritance from the daughter. The daughter gets the right of half of the entire property, and the remaining half is received by the two sisters. And Allah Almighty knows best with rectitude.
Mufti Muhammad Zulfaqar Khan Naimi Kakralwi
Nuri Dar al-Ifta, Madina Masjid Ali Khan Kashipur
8-Jumadi al-Awwal-1442 || ≈ 23-Dec-2020
Click for more fatawa’s of Mufti Zulfaqar Naimi
Views: 55
Total Page Visits: 354 - Today Page Visits: 1 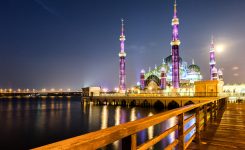 What Is The Islamic Ruling On Disowning Your ...